First, a greeting to all my readers out there in the good old US of A. Hope you all had an absolutely fabulous Inauguration Day ( of whatever political persuasion you may be) and that you celebrated it with with appropriate amounts of good food and drink!!
This painting is another in my series of Whitby.

It shows the Royal Hotel at Whitby on the cliff above the harbour. To the right of the hotel you can just make out the arch made from a pair of whale jaw bones (Whitby had been involved in whaling in the 18th and 19th centuries) and just a little further along, the statue of Captain James Cook. Cook began his training as a seaman in Whitby and his ship, the Endeavour, in which he made his great voyages of discovery, was built in Whitby.
Posted by Unknown at 16:50

Gorgeous! And thanks for the well-wishes for our inauguration of Barack Obama!

I just wanted to say that I love the colors and the scene. It must have been a nice day to be there working on the piece.

Oh, how I love watercolors! And landscapes. It's beautiful!

Love the colours used here, all my favourite warm hues. Whitby looks lovely, I must visit sometime. You make watercolours look easy but I know different.

This watercolor is so appealing it makes me want to be there. Must visit Whitby next time I'm in UK.
Jean

Beautiful work with the colors and blending. Very nice!

Simply beautiful... but I love ALL of your work. You are extremely talented :)

Thanks for all your comments to
Kate
Frank - actually the painting was done at home from photos and sketches I did on the day, and it was nice
Storybeader
Carolann and Jean - yes, Whitby is an inspiring place to visit
Linda
Diana
and Ragtree 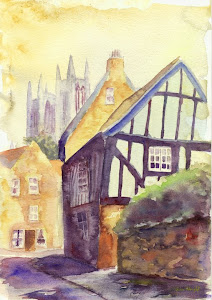